Continuing with images of miniatures I have finished painting this year, I offer you Earthmen Gone Wild.  This particular batch of humans are dressed in Martian regalia, having adopted the dress and customs of their new home. 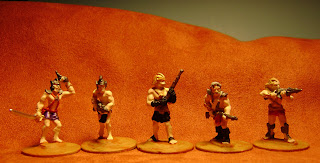 Geo
Posted by Elderac at 7:10 PM No comments:

Part of my goals this year is to get more painting done.  One of the sub-goals was to finish painting some Martian Colonial Troops. 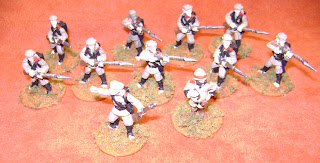 Here is an image of the group with Captain Rutherford Kendall.  There is a character in one of the science fiction stories I am working on that is named Kip Kendall and who wears his beard very similar to the good captain here.  Although the two are in two entirely different universes, as it were, I thought the name was appropriate.


This group is primarily made of figures from RAFM's Space:1889 line.  The British Captain is from Parhoon Station. 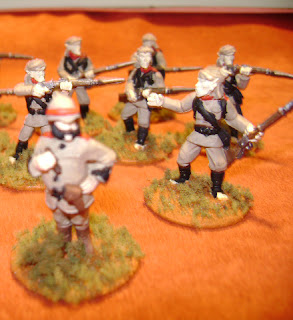 Here is a closer view of the group, particularly the sergeant and the captain.

Posted by Elderac at 7:19 PM No comments:

Welcome to my new blog where I will talk primarily about stuff related to my Victorian Science Fiction gaming.  I'm new to this particular blog structure, so it may be awhile until I can make it fancy.

Geo
Posted by Elderac at 4:37 PM No comments: